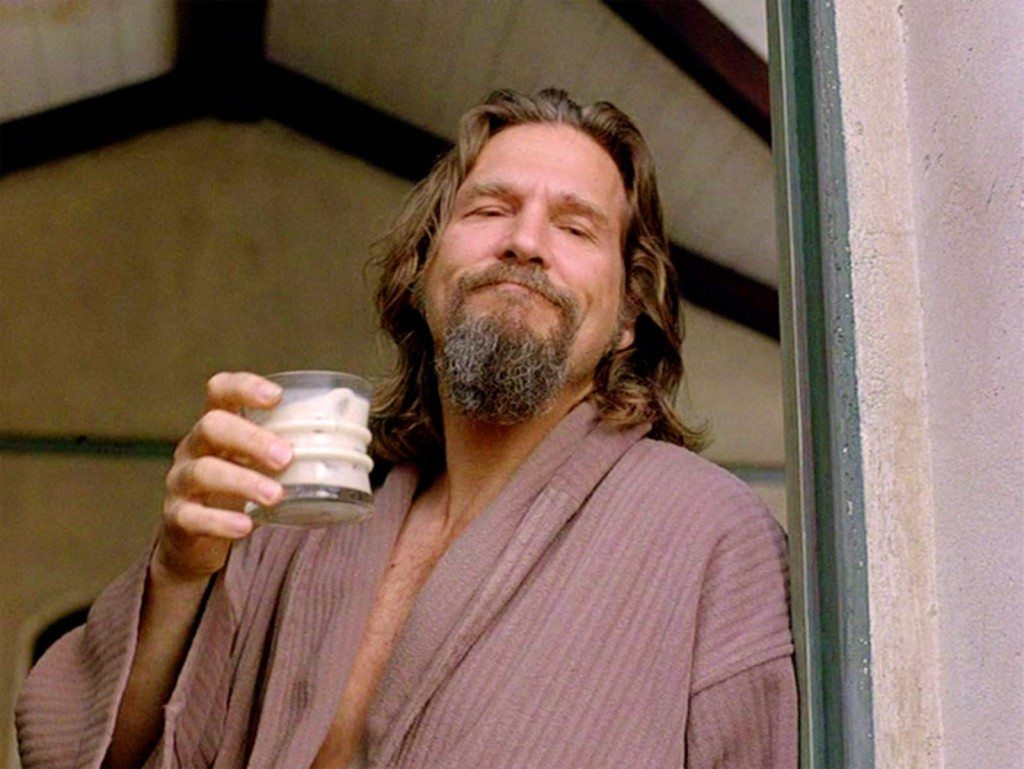 Part One: 4 Spiritual Lessons From The Big Lebowski: Abiding In Dudeism

I grew up in a very strict Christian home.

I rebelled, researched world religions relentlessly, and got burned by churches over and over, all while trying to figure out the meaning of life.

Then, for the first time in years, I watched the Coen brothers’ cult classic, The Big Lebowski.

A friend, documentary director Eddie Chung, had just released a film titled The Achievers which followed Lebowski fans all over the country to conventions and events, chronicling competitions and viewing parties.

Not only was following the cult film a lifestyle, but a religion had been built around it called Dudeism.

Once I watched the film, I applied and, for a modest fee, was ordained as a Dudeist priest by the Church of the Latter Day Dude.

A certificate came in the mail, entitling me to perform weddings, funerals, and like, whatever, man.

At the same time, much to the horror of some people around me, I began to research Buddhism and the philosophy behind the religion.

I found just what I had been looking for, and it centered around the things Dudeism and Buddhism had in common.

This causes the Dude’s rug to be first soiled upon, then stolen, launching a series of events including a supposed kidnapping, fraud, an encounter with nihilists, and several bowling-related incidents.

The movie stars Jeff Bridges as the Dude, John Goodman as Walter, and Steve Buscemi as Donny.

The three attempt to recover the Dude’s rug, which turns out to be much more difficult than it at first appears, as “new information comes to light.”

Dudeism Exists Without the Dude

This is the Dude’s answer when the wealthier Jeff Lebowski calls him “Mr. Lebowski.” The Dude was clearly expressing his view of his identity.

Buddha was not a Buddhist, and the Dude was not a Dudeist. He was just “the Dude.”

The religions that followed are the attempt of others to communicate their message to change the world.

The Dude was just abiding (we take comfort in that) and Buddha was a great teacher.

Religion is just a vehicle by which those teachings are spread.

But both Dudeism and Buddhism are more lifestyles than traditional religions.

They center around the practice of a philosophy rather than a rigid set of rules.

In fact, Huaiyu Chen, Ph.D. and Professor at ASU outlines several reasons Buddhism is not a religion at all.

This Aggression Will Not Stand

The bad guy is suffering, and the biggest cause of suffering is ego.

The biggest cause of ego is attachment to identity.

Buddhism does not define attachment the way many of us think about it.

Zen teacher John Daido Loori said, “According to the Buddhist point of view, nonattachment is exactly the opposite of separation. You need two things in order to have attachment: the thing you’re attaching to, and the person who’s attaching. In non attachment, on the other hand, there’s unity. There’s unity because there’s nothing to attach to. If you have unified with the whole universe, there’s nothing outside of you, so the notion of attachment becomes absurd. Who will attach to what?”

Like the Dude keeps his mind limber and open, so must we, exploring the Four Noble Truths and the Eightfold Path to Enlightenment.

We can use The Big Lebowski as a parable of sorts.

One of the first things I came to understand about Buddhism was that beliefs were not controlled.

Although many Buddhists believe in reincarnation, not all do.

In fact, there are several belief systems within Buddhism.

Those who practice Buddhist teachings are actually allowed to believe anything they want while they practice.

Many things emphasized by other religions are not critical to the practice of Buddhism at all.

This is Not ‘Nam—There Are Rules

The Four Noble Truths and the Eightfold Path are often presented like a list of rules, or dos and don’ts, but what is “right”?

The word for “right” is samyanc in Sanskrit, or samma in Pali, having  a connotation of “wise,” “wholesome,” “skillful,” and “ideal,” or something complete and coherent.

The rules listed in the eightfold path should not be taken as commandments, as in “do this, or you are wrong,” but rather like a physician’s treatment plan for a disease.

They are guidelines which, when followed, result in positive outcomes.

The First Noble Truth: Life is About Strikes and Gutters

Often this truth is stated as “life is suffering.”

But the Pali word dukkha also refers to anything that is temporary, conditional, or compounded of other things.

Even something precious and enjoyable is dukkha, because it will end.

Whether you’re on a roll tonight or throwing gutters, there’s no need to be attached to the outcome.

This, however, is easier said than done.

The cause of “suffering” is related to craving or thirst, the search for something outside ourselves to make us happy.

The entire plot of the Big Lebowski is the Dude’s search for his rug: what once made him happy, and what he hopes will “tie the room together” and make him happy again.

Truthfully, the key to the Dude’s happiness and our own lies within us.

The Third Noble Truth: New Information Has Come To Light

The good news in Buddhism is the Buddha taught that with mindful practice, we can put an end to craving, and thus, bring suffering to an end.

Ending this cycle is called enlightenment.

This is the point at which the larger picture becomes clearer, as “new information comes to light,” and we understand the futility of attachment and craving.

The Fourth Noble Truth: Lots of Ins and Outs and What-Have-Yous

The eightfold path to enlightenment offers the method of mindful practice, or the treatment of the disease of attachment.

These steps, while they seem complicated at first, can be followed, and enlightenment achieved.

Sometimes, attachments are lost along the way, but things tend to balance out.

The Big Lebowski, combined with my own search for truth, led me toward enlightenment.

The parallels combined with the humor and subtle journey of the Dude aided my understanding.

I hope it does yours as well. Because seeking enlightenment, becoming a Buddha or a Dude, is possible for all of us.

Although we may struggle, it’s good to know the Dude is out there, abiding for all of us sinners.

I take comfort in that.

Part Two: The Big Lebowski And The Eightfold Path To Enlightenment

Previously, I wrote about Four Spiritual Lessons from the Big Lebowski: Abiding in Dudeism, and explained a little bit of my journey.

I used the Coen brothers’ cult classic, The Big Lebowski, and the religion surrounding it, Dudeism, as a parable to expound on the Four Noble Truths.

If the journey ended there, things would be a bit simpler, but the Eightfold Path to Enlightenment can also be illuminated by using parallels from the life of the Dude.

This causes the Dude’s rug to be first soiled upon, then stolen, launching a series of events including a supposed kidnapping, fraud, an encounter with nihilists, and several bowling-related incidents.

The movie stars Jeff Bridges as the Dude, John Goodman as Walter, and Steve Buscemi as Donny.

The three attempt to recover the Dude’s rug, which turns out to be much more difficult than it at first appears, as “new information comes to light.”

Throughout the story, the three friends illustrate many lessons we can learn from.

The Wisdom Path: Understanding Things as They Are

At first, things are very confusing.

The Dude’s head is forced into a toilet, and two men demand money owed by his wife for gambling debts.

Since he is not even married, this leads him to try to understand things as they are, or pursue a path of wisdom.

To do so, he must achieve right view and pursue right intention, to provide him with a sense of direction.

“Sometimes you eat the bear, sometimes the bear eats you.”

The outline of the right view is expressed in the Four Noble Truths and involves the understanding of three principles.

The Dude makes the decision to pursue change for the better by forsaking wrong or immoral qualities and aspiring to harmlessness.

His struggle to follow this intention allows him to progress on his journey throughout the film.

For the Dude to concentrate properly, he must avoid wrong deeds and words.

This conduct aids the purification of his mind, allowing him to better understand the world around him.

“Do you have to use so many cuss words, Dude?” This factor is not just about cussing.

It really means the Dude should:

Right action involves taking only actions that will not cause harm to others or be perceived as corrupt.

When Bunny, wife of the non-Dude Lebowski, ran off (“She probably kidnapped herself, man”) she displayed wrong actions.

But so did Mr. Lebowski in his attempt to use the Dude and take advantage of the Little Lebowski Urban Achievers (proud we are of all of them). The Dude, in his own way, tried to steer them both toward right action.

Even if, like the Dude, you are “between careers at the moment,” there are careers that should be avoided on the path to enlightenment.

The Dude uses a strict regimen of diet and exercise to keep his mind limber.

While in his case this is aided by drugs and alcohol (not the most enlightened part of the movie), mental discipline definitely plays a role in his path.

The Dude makes an effort to avoid wrong and harmful words, thoughts, and deeds, and to bring out the best in others.

He even explains to Walter that “You’re not wrong, you’re just an a**hole.”

The keys to right effort are:

The Dude tries to keep his mind alert to things that could harm the mind or body, especially when there is a beverage involved.

There are a few steps to mindfulness.

“New information has come to light.”

To process this information, the Dude must concentrate on something, or meditate to achieve a better state of consciousness.

He can do this a few different ways.

The Dude’s Path to Enlightenment

Throughout The Big Lebowski, the Dude discovers both the mental and emotional causes of suffering.

The mental cause is ignorance of the way things truly occur and is corrected by his acquisition of knowledge.

The emotional cause is desire or attachment—like to a rug—and it can be managed by learning to understand and manage emotions effectively.

Once the Dude accepts the fact that he doesn’t need the rug to be happy, it all works out in the end, although not for everyone.

Much can be learned from the Dude, Walter, and Donny about attachment, ignorance, and the path to enlightenment.

But only through practice can one hope to achieve it.

We can all simply abide in truth. Like the Dude. Take comfort in that. Namaste.