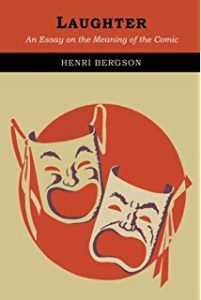 We will now pass from the comic element in FORMS to that in GESTURES and MOVEMENTS. Let us at once state the law which seems to govern all the phenomena of this kind. It may indeed be deduced without any difficulty from the considerations stated above. THE ATTITUDES, GESTURES AND MOVEMENTS OF THE HUMAN BODY ARE LAUGHABLE IN EXACT PROPORTION AS THAT BODY REMINDS US OF A MERE MACHINE. There is no need to follow this law through the details of its immediate applications, which are innumerable. To verify it directly, it would be sufficient to study closely the work of comic artists, eliminating entirely the element of caricature, and omitting that portion of the comic which is not inherent in the drawing itself. For, obviously, the comic element in a drawing is often a borrowed one, for which the text supplies all the stock-in-trade. I mean that the artist may be his own understudy in the shape of a satirist, or even a playwright, and that then we laugh far less at the drawings themselves than at the satire or comic incident they represent. But if we devote our whole attention to the drawing with the firm resolve to think of nothing else, we shall probably find that it is generally comic in proportion to the clearness, as well as the subtleness, with which it enables us to see a man as a jointed puppet. The suggestion must be a clear one, for inside the person we must distinctly perceive, as though through a glass, a set-up mechanism. But the suggestion must also be a subtle one, for the general appearance of the person, whose every limb has been made rigid as a machine, must continue to give us the impression of a living being. The more exactly these two images, that of a person and that of a machine, fit into each other, the more striking is the comic effect, and the more consummate the art of the draughtsman. The originality of a comic artist is thus expressed in the special kind of life he imparts to a mere puppet.

We will, however, leave on one side the immediate application of the principle, and at this point insist only on the more remote consequences. The illusion of a machine working in the inside of the person is a thing that only crops up amid a host of amusing effects; but for the most part it is a fleeting glimpse, that is immediately lost in the laughter it provokes. To render it permanent, analysis and reflection must be called into play.

In a public speaker, for instance, we find that gesture vies with speech. Jealous of the latter, gesture closely dogs the speaker’s thought, demanding also to act as interpreter. Well and good; but then it must pledge itself to follow thought through all the phases of its development. An idea is something that grows, buds, blossoms and ripens from the beginning to the end of a speech. It never halts, never repeats itself. It must be changing every moment, for to cease to change would be to cease to live. Then let gesture display a like animation! Let it accept the fundamental law of life, which is the complete negation of repetition! But I find that a certain movement of head or arm, a movement always the same, seems to return at regular intervals. If I notice it and it succeeds in diverting my attention, if I wait for it to occur and it occurs when I expect it, then involuntarily I laugh. Why? Because I now have before me a machine that works automatically. This is no longer life, it is automatism established in life and imitating it. It belongs to the comic.

This is also the reason why gestures, at which we never dreamt of laughing, become laughable when imitated by another individual. The most elaborate explanations have been offered for this extremely simple fact. A little reflection, however, will show that our mental state is ever changing, and that if our gestures faithfully followed these inner movements, if they were as fully alive as we, they would never repeat themselves, and so would keep imitation at bay. We begin, then, to become imitable only when we cease to be ourselves. I mean our gestures can only be imitated in their mechanical uniformity, and therefore exactly in what is alien to our living personality. To imitate any one is to bring out the element of automatism he has allowed to creep into his person. And as this is the very essence of the ludicrous, it is no wonder that imitation gives rise to laughter.

Still, if the imitation of gestures is intrinsically laughable, it will become even more so when it busies itself in deflecting them, though without altering their form, towards some mechanical occupation, such as sawing wood, striking on an anvil, or tugging away at an imaginary bell-rope. Not that vulgarity is the essence of the comic,—although certainly it is to some extent an ingredient,—but rather that the incriminated gesture seems more frankly mechanical when it can be connected with a simple operation, as though it were intentionally mechanical. To suggest this mechanical interpretation ought to be one of the favourite devices of parody. We have reached this result through deduction, but I imagine clowns have long had an intuition of the fact.

This seems to me the solution of the little riddle propounded by Pascal in one passage of his Thoughts: “Two faces that are alike, although neither of them excites laughter by itself, make us laugh when together, on account of their likeness.” It might just as well be said: “The gestures of a public speaker, no one of which is laughable by itself, excite laughter by their repetition.” The truth is that a really living life should never repeat itself. Wherever there is repetition or complete similarity, we always suspect some mechanism at work behind the living. Analyse the impression you get from two faces that are too much alike, and you will find that you are thinking of two copies cast in the same mould, or two impressions of the same seal, or two reproductions of the same negative,—in a word, of some manufacturing process or other. This deflection of life towards the mechanical is here the real cause of laughter.

And laughter will be more pronounced still, if we find on the stage not merely two characters, as in the example from Pascal, but several, nay, as great a number as possible, the image of one another, who come and go, dance and gesticulate together, simultaneously striking the same attitudes and tossing their arms about in the same manner. This time, we distinctly think of marionettes. Invisible threads seem to us to be joining arms to arms, legs to legs, each muscle in one face to its fellow-muscle in the other: by reason of the absolute uniformity which prevails, the very litheness of the bodies seems to stiffen as we gaze, and the actors themselves seem transformed into automata. Such, at least, appears to be the artifice underlying this somewhat obvious form of amusement. I daresay the performers have never read Pascal, but what they do is merely to realise to the full the suggestions contained in Pascal’s words. If, as is undoubtedly the case, laughter is caused in the second instance by the hallucination of a mechanical effect, it must already have been so, though in more subtle fashion, in the first.

Continuing along this path, we dimly perceive the increasingly important and far-reaching consequences of the law we have just stated. We faintly catch still more fugitive glimpses of mechanical effects, glimpses suggested by man’s complex actions, no longer merely by his gestures. We instinctively feel that the usual devices of comedy, the periodical repetition of a word or a scene, the systematic inversion of the parts, the geometrical development of a farcical misunderstanding, and many other stage contrivances, must derive their comic force from the same source,—the art of the playwright probably consisting in setting before us an obvious clockwork arrangement of human events, while carefully preserving an outward aspect of probability and thereby retaining something of the suppleness of life. But we must not forestall results which will be duly disclosed in the course of our analysis.