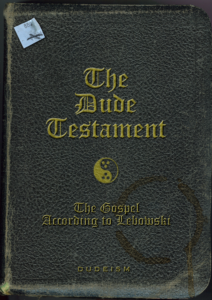 The Gospel According to Lebowski

From The Abide Guide: Living Like Lebowski
By Oliver Benjamin and Dwayne Eutsey
Published by Ulysses Press

The big picture! It’s hard to see sometimes. Whether we’re looking at it from a little bungalow on Venice Beach or a huge mansion in Pasadena, our thinking about life can become very uptight. There are so many strands to keep in our heads, man. It can be stupefyin’. What we need is something to help tie it all together. Luckily there are ways, dude. I can get you a TOE (theory of everything) by three o’clock. Or maybe you’re just looking for a well-woven tapestry of ideas, a foundation that will make you feel at home in the world. If that’s what you’re after, then listen to this a-here Big Lebowski analysis we’re about to unfold. It’ll really help you make sense of the whole durn human comedy. Parts, anyway. We’re talking about Dudeism here.

There have already been lots of those so-called “theories of everything,” which purport to sum up what life’s all about. For most of human history, TOEs have been conveyed through tall tales and scribbles on walls, and later through books and organized religion and law. But today people are busy, as I know you are. So the most popular way to step back and take in the “big picture” is through the compressed frame of reference that cinema provides. Now, many learned men have disputed this, but we believe that The Big Lebowski is the film for our time and place, high in the running for best movie ever, and so it makes a purty good substitute for all those severed TOEs scattered about out there.[1]

Okay then, what makes The Big Lebowski the most important—nay, most religious—movie of our day and age? It’s an important question. Like most great books or philosophies or religions, the most powerful moving pictures help us perceive a much broader portion of the world than we normally witness in the course of our day-to-day lives. And, what’s more, they do so without straying too far from the center of humanity. In the parlance of The Big Lebowski, they really tie our ruminations together.

For a brief two hours, great movies provide us with certain information. New shit comes to light and we are made privy to it. How much we dig the story that unfolds before us is usually determined by how broadly and deeply that light penetrates us. In other words, truly great movies shine light upon the whole durn human comedy. Not just the parts.

In the Coens’ case, a lot has to do with their use of the wide-angle lens. Filmmakers who employ wide angles draw the viewer more intimately into the frame of reference. And the Coen Brothers are the uncontested philosopher kings of wide angles.[2] I’m not just talking about interactive hardware here—not only do they employ the widest angle lenses in their films of any auteurs in Hollywood, they also examine a broader view of the human condition than just about anyone in the league. And though it might not seem so at first, The Big Lebowski is likely their widest. And wildest. It’s a purty good story too—makes us feel all warm inside.

Moreover, though it may not be evident upon first viewing (or second, or even the tenth), The Big Lebowski might well be the “widest” film in history. It stands (or slouches) alongside other great works of literature that tried to tie all of humanity together: Dante’s Inferno. Melville’s Moby Dick. Homer’s Odyssey. The Bible. Compeers, you know?

Surely one of the reasons people find such inspiration and solace in The Big Lebowski is that, like those other farseeing works of literature, it sits on a bluff overlooking valleys and oceans, peering over the past and future horizons of civilization. With humor and humanity, it teaches mankind how to “fit right in there.” Consequently, like other great pieces of literature that are still argued over and discussed and quoted long after they were composed, The Big Lebowski seems destined for the same sort of immortality. No other film has engendered so much scholarly speculation in such a short time, and no other film has engendered such ardent fans with such a propensity to employ its parlance in common conversation. And though some dismiss it as a ludicrous stoner comedy with a ridiculous plot, no other film provides such a welcome frame of reference for our time and place. We take comfort in that.

What follows is our attempt to ferret out the essential lessons of the film and how to incorporate them into the “big picture” of your own life. We’ll mosey along the trail of the film with you, pointing out important lookouts along the way from the back of our high horse. You may not agree with everything we have to say, but remember, this is all just, like, our opinion, man. Take from this what you dig and forget about any TOEs we might accidentally step on or cut off. We’re not trying to scam anyone here. No harm intended. More than anything else, we’re sympathizing here, dude.

The truth of reality, is that you are a simple emanation of your core. Your core is the pure energy within. Within, your true self is a singularity of your own consciousness.

Shut The Fuck Up Donnie. Let us all kill the little man inside us questioning all of our great leaps towards happiness