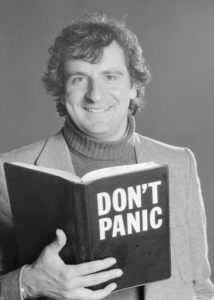 Summary: Hitchhiked his way into our hearts with his deep and hilarious novels
Category: Great Dudes

There are many Great Dudes throughout history who offer insights into what it means to abide. Some, like Carl Sagan, provide profound insights into the vast reaches of cosmos; others, like Mitch Hedberg, point out the hilarious absurdities of being a human being inhabiting this pale blue dot.

And then there’s someone like Douglas Adams, who melded the two into something as cosmologically comical as his Hitchhiker’s Guide to the Galaxy “Trilogy in Five Parts”. It isn’t surprising that a man who wrote for both Monty Python and Dr. Who—and who jammed once with his good friend David Gilmour’s band Pink Floyd—would write such a trippy classic.

The adventures he wrote took the series’ hapless hero, Arthur Dent, on a journey through an absurd cosmos in search for the answer to the Question of Life, the Universe, and Everything (which, of course, is 42).

Through it all, Adams reassured his readers inhabiting an equally meaningless universe with the book’s memorable phrase, “Don’t Panic”, which went on to inspire Elon Musk to have on the screen of the Tesla Roadster he launched into orbit in 2018.

An impressive legacy for a guy who once spent a drunken night laying in an Austrian field gazing up at the stars.

Don’t forget his contribution to Red Dwarf — definitely the most dudeist sci-fi series ever (BBC) — Shout out to Boys from the Dwarf!!!