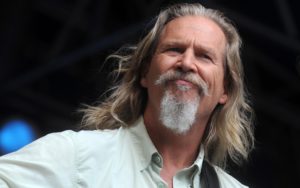 Summary: The real dude behind the Dude is a real Dude in real life
Category: Great Dudes
Tags: Dudeism, The Big Lebowski, Zen

“Sometimes, there’s a man,” observes the Stranger in The Big Lebowski. “Well, he’s the man for his time and place. He fits right in there.” He’s talking about the film’s protagonist, the Dude, but the Stranger could have just as easily been talking about the actor playing the iconic character, Jeff Bridges. One of the most popular and beloved actors around, Bridges has a career spanning decades. Yet, two decades into the 21st century, he remains best known for his role in a ‘90s movie about a ‘60s burnout. What makes Bridges the man for his time and place? A pair of testicles, to be sure, but it’s also his authenticity and ability to keep the strikes and gutterballs of life in perspective. Bridges demonstrated these qualities recently when he, his wife Susan, and their dog were rescued by helicopter as mudslides overwhelmed their home. Taking it in stride, Bridges quoted a line from his movie Starman to the rescuers: “You know what I love most about you humans? You are at your very best when things are worst.” Such presence of mind in the midst of calamity most likely stems from Bridges’ Zen practice, another trait he shares with the Dude. As he told Rolling Stone: I bet the Dude is into some Eastern philosophy (that’s) kinda like realizing that the more open you get, life keeps challenging that openness to open you more, and so, at some point, you say, “Well, that’s the game. I’m just gonna sit back and dig the way it is.” Or, just like the Dude, Jeff Bridges abides. Related links: http://www.jeffbridges.com/ https://www.biography.com/people/jeff-bridges-9225949