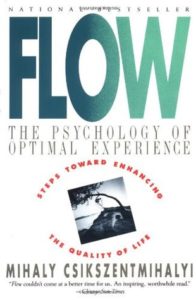 Summary: Going with the flow is not just a hippie injunction: It’s a full-on science, one which looks at the root of what it is to be truly alive
Category: Books

Perhaps the philosopher with the name most difficult for non-Croatians to pronounce, Mihály Csíkszentmihályi birthed one of the modern philosophies least difficult to understand. Colloquially it’s referred to as “Flow.” (His name is pronounced Me-High Chick-Sent-Me-High, by the way. Which we can’t help but consider amusingly appropriate.)

Flow is a concept that is easy for most moderns to intuit, as it has long been a part of pop-culture – as in “go with the flow, man” or “let it flow.”

It’s not so much that Csíkszentmihályi invented the philosophy, but rather that he identified it as a measurable psychological state and investigated its aspects. That is to say that although the concept of Flow had been around since the beginning of time, touched on by the Ancient Greeks and many schools of Asian thought, it hadn’t been properly examined via the scientific method. Furthermore, Csíkszentmihályi’s experiments and writings led to interesting ruminations and extrapolations of these ancient ideas.

Essentially, Flow is the mental and behavioral state in which a person finds him or herself deeply immersed in an activity, so much so that the activity feels effortless. This, of course is similar to the Taoist concept of Wu-Wei – sometimes translated from the Chinese as “action without intention” or “uncoerced activity.”

Flow as a method of practice blurs the line between work and play, what Jeff Bridges fancifully refers to in interviews as “plork,” which describes his attitude toward his career. “Making work into play” is a concept we all understand intuitively, but Csíkszentmihályi’s book delves into detail on the practice, and validates its suppositions with science.