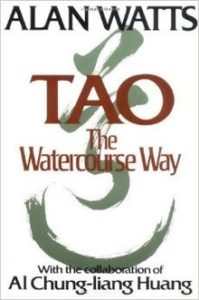 Since at least the 1960s, Eastern philosophies and spiritual practices have proliferated in the West. It’s become commonplace these days to chat over lattes with your friend the acupuncturist about Buddhist meditation techniques before heading off to yoga class.

Of all the philosophies and practices that have migrated from the East, Taoism has yet to make the same splash in the Western mainstream as Buddhism and yoga. Sure, Taoism’s yin-yang symbol is everywhere, but wider awareness in the West of this ancient worldview appears to be meandering along at the unhurried pace of a slow boat from China.

Things might have been different if counterculture guru Alan Watts had not died in the middle of writing TAO: The Watercourse Way. After all, Watts made Zen accessible to a new generation with his classic The Way of Zen. Even so, The Watercourse Way, completed by Watts’ friend and collaborator Al Chung-liang Huang, provides a good introduction to Taoist principles that the Western mentality often finds too slippery to grasp, such as this reflection on wu-wei (nonaction):

“…the greatest power is available to those who do not seek power and who do not use force. To be anxious to survive is to wear oneself out, and to seek power and to use force is to overstrain one’s system. One is best preserved by floating along without stress.”

With insights like that, is it surprising that Taoism has been so slow to take hold in the West when it’s really all about just letting go?