The Tao of Pooh 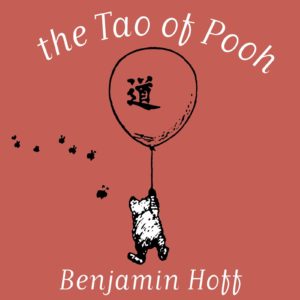 Although the essence of Taoism is simplicity, one of the reasons this ancient worldview isn’t as well known in the West as Buddhism is might be the enigmatic nature of its sacred text, Tao Te Ching.

Buddhism has its own cryptic sutras and koans, of course, but it also has fundamental texts—the Four Noble Truths and Noble Eightfold Path—that clearly layout the Buddha’s basic teachings about life and how to live it. Tao Te Ching, on the other hand, is a collection of brief, often obscure, and at times contradictory meditations about Tao (The Way) like:

Look, it cannot be seen – it is beyond form.

Listen, it cannot be heard – it is beyond sound.

Grasp, it cannot be held – it is intangible.

These three are indefinable;

Therefore they are joined in one.

Not that there isn’t profound wisdom to be found in Taoist texts; it’s just that to the Western mind these esoteric writings can often seem inscrutable. That’s what inspired Western Taoist Benjamin Hoff to use a simple, beloved children’s story about a little bear, Winnie the Pooh, to interpret the simple basics of Taoism for the West.

At the heart of it, The Tao of Pooh links Pooh’s even-tempered nature to Taoist principles like P’u (pronounced like Pooh), or “Uncarved Block.” P’u essentially means that when anything (including an uncarved block, a bear, you) remains in its original simplicity, it contains its natural power.

It’s this power that Taoism says allows us to live simply and spontaneously so that when the honeypots we seek in life elude us, we can, like Pooh Bear, shrug it off with an unfazed “Oh, bother,” and happily tumble along with the flow.

« Previous entry: The Places That Scare You—A Guide to Fearlessness in Difficult Times   Next entry: How to Be Idle: A Loafer’s Manifesto »
(Edit entry) (Delete entry)
Get a free honorary Ph.D degree at Abide University
Subscribe
Connect with
Login
Connect with
1 Comment
oldest
newest most voted
Inline Feedbacks
View all comments

I read about, this book many years before, but I never read the book itself. Maybe I’ll pick it up later down the road.