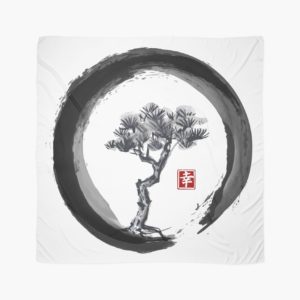 As with most world religions today, there isn’t just one Buddhism. There are many Buddhisms, ranging from the colorful bang and clatter of Tibetan Buddhism to the silent austerity of Zen.

And all of them are rooted in the enlightenment experience of one guy abiding under a Bodhi tree in India.

In many ways, the Zen form of Gautama’s essential dharma is probably closest in form to his initial awakening. Tracing its lineage from the Bodhi tree through China (where it’s called “Chan”) and into Japan, Zen consists of two schools—Soto Zen, which emphasizes Zazen, sitting meditation; and Rinzai Zen, deep contemplation of koans—as the core of its practice.

While complementary, Soto and Rinzai each has its particular focus: sitting Zazen is not necessarily for enlightenment (Satori), but for simply sitting still and experiencing the moment. “Zazen has no object,” said one Zen master. “It is purposeless, it only brings us back to ourselves.” Deep contemplation of an absurd, indecipherable koan during Zazen, on the other hand, is intended to shock the mind into an awareness beyond dualistic thinking.

The Zen experience arising from sitting meditation is not intended as purely esoteric. It is to be carried into the heart of everyday activities, the creation of art, and even in the practice of martial arts. As with Taoism and other Asian philosophies, Zen’s emphasis is not on memorizing a creed or dogma, but on the lived experience captured in Hong Zicheng’s words:

Only when there is stillness in movement

can the spiritual rhythm appear…