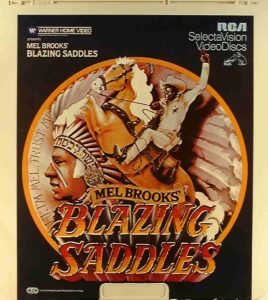 In this politically correct age when many stand-up comedians refuse to perform on college campuses, Abide University offers a safe space for anyone who appreciates off-color, even so-called offensive humor. Not the kind of insulting, mean-spirited humor that’s meant to trigger outrage, but the kind that’s an equal-opportunity skewer of everyone’s bloated sacred cows.

Mel Brooks’ Blazing Saddles is the classic ground- (and wind-) breaking prototype of this kind of iconoclastic humor.

In his no-jokes-barred parody of Hollywood westerns, Brooks tosses in everything, including the kitsch (cheesy show tunes) and stink (the infamous farting scene). There are racist and sexist slurs, jabs at religion, weed, corrupt politicians enriching themselves through their phony-baloney jobs, and someone even sucker punches a horse. Unlike a lot of shock comedy today, however, Blazing Saddles’ humor exhibits a simple faith in our shared humanity and the hope we can abide together despite our foibles.

As Brooks observed, irreverent comedy has always served that purpose. “Comedy is the lecherous little elf whispering into the king’s ear,” he said, “always telling the truth about human behavior.” Sadly, he also acknowledges his comedy couldn’t be made today because of so many super-sensitive PC types.

“You know,” to quote Gene Wilder in the movie, “morons.”

Watched this with my dad when I was a teenager and he laughed so hard he pissed himself! He passed away a few years ago and this movie is an all time favorite to watch and remind me of simpler times.

I truly believe that Blazing Saddles is to comedy what the Ten Commandments is to religion…it’s.bedrock.