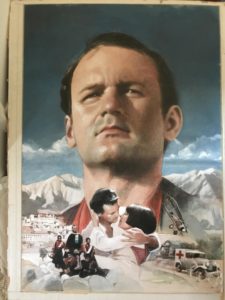 It’s never easy to translate the depth and complexity of a good book into a movie, or a celluloid narrative onto the page. Often, the medium is the message, as Marshall McLuhan famously put it.

Think about the lackluster attempts to adapt a book like The Great Gatsby to the screen. Or the largely forgotten film efforts surrounding Somerset Maugham’s story of a young American’s quest for enlightenment in The Razor’s Edge.

The 1946 film starring Tyrone Power (with Maugham) may have garnered a number of Academy Award nominations and even one win, but it wasn’t a big critical hit. The New York Times said the “earnest and expensive endeavor to put upon the screen (the book’s) tenuous drama and morality” might appeal to “a great many people who are sentimentally inclined to its vague philosophy.” Roger Ebert liked Bill Murray’s overlooked 1984 adaptation, but still dubbed it “your standard 1960s hippie drama.”

Maugham’s story of searching for meaning in a world destroyed by a catastrophic world war is better suited for the written word. It’s not easy to convey the book’s emphasis on practicing “calmness, forbearance, compassion, selflessness and continence” in film’s visual narrative style.

Both film versions, however, admirably attempt to capture the book’s essential insight that “it’s a mistake to think that those holy men of India lead useless lives.” Actually, these gurus, like both movie versions, “are a shining light in the darkness.”

I loved this movie when it was originally released, and find that many subsequent Bill Murray movies carry a deeper message under their overt comedy.

The movie is as much a search for meaning in a superficial world as it is an illustration of 3 very different people struggling with post-traumatic stress. The World War I ambulance driver (depicted by Bill Murray) returns home from war to find that he has changed, that his perspective on life and death have changed, and that his family and friends, mainly pretentious snobs from “society” backgrounds, have not. He is frustrated and angry with their expectations of him (to marry and accept a position at a brokerage office). It isn’t simply that they don’t realize or accept that… Read more »

I believe this was Bill Murray’s first serious role, but there were subtle moments when his humor was present when appropriate. As a vet with PTSD, I often wonder how this film–in today’s society of PTSD acknowledgement–would be responded to if it were to be re-released in theaters.

I’m a huge fan of this film and watch it a couple of times a year. Admittedly, I’ve never read the book, but it’s in a long list of other books to read.