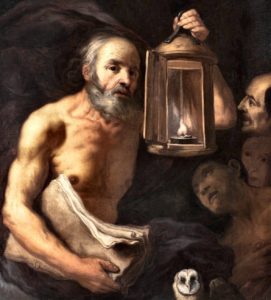 Summary: The founder of Cynicism, which is not as cynical (by today’s definition) as it sounds. It’s actually pretty life-affirming
Category: Great Dudes
Tags: Cynicism

If Diogenes were around today, he’d probably be dismissed as a shiftless vagrant. But because he hung around ancient Athens with big-name philosophers like Socrates and Plato—and happens to be one of the founders of Cynicism—Diogenes is actually a notable figure in Western philosophy.

Even so, we know only a little more about him than you might know about a homeless guy you see sleeping on the sidewalk.

After his exile from Sinope for defacing money (which was apparently more serious back then than today), Diogenes relocated to Athens. Like Socrates, he may have visited the Delphic Oracle. Or maybe he didn’t. He may also have been captured by pirates at one point and enslaved in Corinth for a time. Or perhaps he wasn’t.

The lesson the mouse taught Diogenes was actually key to his philosophy of Cynicism. Just as the mouse instinctively adapts itself to any circumstance, Diogenes and the Cynics basically believed the good life is found by living an unpretentious life more in accord with reason and nature than with the sophistries and social conventions of the polis.

A worthwhile philosophy, though you might want to skip the jerking off in public part.