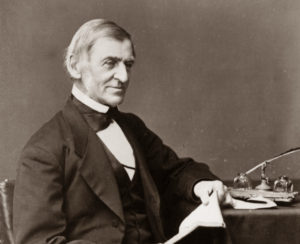 For a dead white male, Emerson is a pretty cool guy who blazed a trail over a century ago that became a gateway to the proverbial “road less traveled” available now.

After graduating from Harvard Divinity School, Emerson served as a Unitarian minister like his father before him. Although the Unitarians were theological upstarts at this time—making theological waves throughout stodgy New England with their brand of liberal Christianity—Emerson grew to see them as too intellectual and became increasingly disenchanted with Christianity too.

When he left the ministry, Emerson also left the chilly environs of Boston for the intellectual ferment of Europe. There, he hung around with the likes of Wordsworth and Coleridge, drinking in Romanticism and other newly emerging philosophies percolating around the Continent at the time. These fresh influences, along with his interest in ancient Hinduism (he was among the first Westerners to study its sacred texts), set Emerson down the path as a progenitor of American Transcendentalism.

Emphasizing self-reliance, valuing individual intuition, and extolling the potential for unending self-improvement, Transcendentalism was an influential philosophic/literary movement that challenged the stifling rationalism of the time. Emerson also infused it with Eastern mysticism with his concept of the Over-Soul—a pervading Divine Intelligence animating everything.

The people his philosophy influenced include his friend Henry David Thoreau, Friedrich Nietzsche, the Beats and Hippies, and beyond.

In many ways, Emerson’s adage to “Trust Thyself” is a vital link connecting the Delphic Oracle’s “Know Thyself” to Bob Dylan’s hipster aphorism “Dig Yourself.”