Fuck It – The Ultimate Spiritual Way 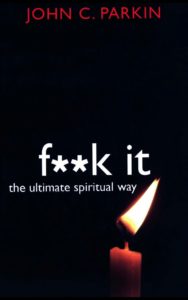 Even if you’re the rare goody-two-shoes who has never uttered the vulgar phrase in this title, you definitely know the pissed off feelings that usually provoke the rest of us to grumble it. It’s a verbal expression of our primal flight response, a cue indicating that you’ve just about had it with all this bullshit.

For modern-day spiritual advisor John C. Parkin, however, saying “fuck it” may just be a shortcut to enlightenment. Given that he offers e-courses and week-long retreats on the expletive’s power to liberate us from anxiety, Parkin is quite serious.

His simple premise in Fuck It—The Ultimate Spiritual Way is that with the proper focus, this most foul of Western slang can be a pathway to Eastern spiritual notions of letting go, giving up, and realizing that whatever’s bugging you at the moment ultimately doesn’t matter.

Rather than growling the phrase in aggravation, Parkin advises instead that

when you say Fuck It,…let go of your hold on something…causing you pain,…give in to the flow of life. Say Fuck It to something…anything. And feel the freedom and release it brings.

There are those who might critique Parkin’s advice as facile (after all, where are all the arduous rituals, chanting, meditation techniques?), or those who would accuse him of culturally appropriating Eastern culture.

To these critics, however, it’s easy to imagine what Parkin’s response would be.

I’ve practiced “fuck it” from a very early age.

Sometimes you just have to say fuck it.