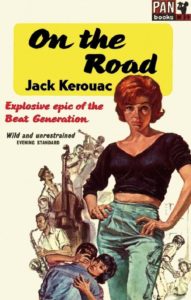 Summary: The highest profile book of the Beat Generation and still one of its most relevant today
Category: Books

Capote probably had in mind Kerouac’s self-described “spontaneous prose” method of writing On the Road, his iconic Beat novel that captured the restlessness of the postwar generation. Kerouac’s composition of the book is as legendary as the book itself. Fueled mostly by caffeine and cigarettes, he banged out the first draft in three weeks on a continuous roll of paper he taped together.

Because this initial draft is one long, typewritten paragraph, formal writers like Capote had the impression that Kerouac was unconcerned with traditional narrative conventions. However, Kerouac and the Beats were experimenting with these conventions much in the same way a jazz musician improvises with musical structures—not only were they trying to tap something raw and true in the heat of the creative moment, they sought to express the experience of it as genuinely as possible.

Which isn’t to say Kerouac didn’t revise and polish his spontaneous draft into its published version. It’s just that what makes his autobiographical tale of the cross-country journeys of his alter ego Sal Paradise and Dean Moriarity (Neal Cassady) so memorable are those raw passages from his draft that capture the essence of their quest for new kicks, the next high, satori (or a combination of the three).

On the Road is much more than just stenography. It’s a testament to humanity’s abiding search for “IT”—that elusive truth that’s always waiting for us somewhere around the next bend.