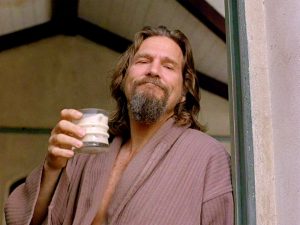 Jeffrey Lebowski (a.k.a. “The Dude”) is one of the most popular characters in modern history, and so, we feel, worthy of serious (and not-so-serious) academic study.

Well, dude, we don’t know. It’s a mystery to us, and yet like all good mysteries, it’s one that’s prone to encourage a lot of discussion. So we’ve got some theories on the subject.

Mainly, the Dude represents an ideal state of mind, one which the sages of the world have tried to point us towards throughout history. It’s not easy being human, especially in a world which we were not emotionally, intellectually, socially or biologically designed to inhabit.

As modern evolutionary theory has it, we are genetically adapted to a long-lost lifestyle–namely hanging out in on foresty jungly meadows in small groups of close-knit communities with comfortable clothing and a lot of free time on our hands.

The Dude represents an idea of how we might “settle in” to this alien landscape and tie our room together in a way that helps us get through the whole durn human comedy; in which we might better get along with people who see things differently than we do; and in which we might more aptly deal with disappointment, danger and dipshits at our door.