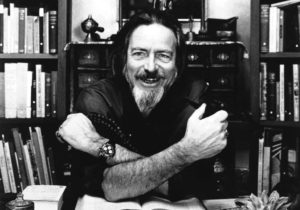 Do the times make the man, or does the man make the times?

In Alan Watts’ case, it’s definitely a combination of both.

By the late 1940s, the English-born Watts was an unconventional Anglican priest who was out of step with his parish in post-war Chicago. His libertine views on sex, interest in Zen Buddhism, and ultimate rejection of Christianity led to scandal and his resignation from the church.

Just as McCarthyism was heating up in Cold War America, Watts moved to San Francisco where the times, they were a-changing from the rest of Eisenhower America. As one of the hubs of the Beat movement and alternative views of various stripes, Frisco was the perfect place for an intellectual free spirit like Watts. Before long, he was hosting a popular radio program on Eastern philosophies and was soon recognized in the national scene as a pop guru in the emerging Sixties’ counterculture.

Through his many articulate lectures and accessible books like The Way of Zen and This is It, Watts introduced an entire generation to Buddhism, Hinduism, and Taoism, while living a counterculture lifestyle on his houseboat residence in Sausalito. He’s even immortalized in two of Jack Kerouac’s books, The Dharma Bums and Desolation Angels.

Watts is still considered an expert on Eastern thought and retains his status as a pop guru in the Internet Age. Along with several of his lectures available on Youtube, the creators of South Park have also introduced Watts to millennials through animated versions of his talks.