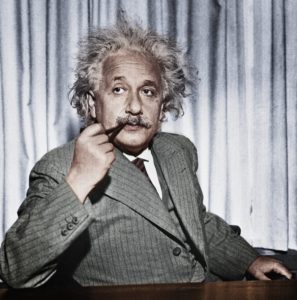 Summary: The smartest dude in history is also one of the most easygoing
Category: Great Dudes

What more can we say about the guy Time magazine dubbed “Person of the 20th Century”?

Like Sinatra and Elvis, all you have to do is invoke the name “Einstein” and practically everyone knows who you’re talking about. Even if you have no idea what E=MC2 means, chances are you’re aware of his famous equation positing the interchangeability of energy and mass.

Einstein’s theory of general relativity not only redefined Newtonian physics and how we comprehend the cosmos; it also (to his horror as a pacifist) enhanced our self-destructive tendency toward total annihilation with the advent of the atomic bomb.

As if all that wasn’t notable enough, Steven Spielberg says that Einstein’s distinctive eyes were the inspiration for the disarmingly kindhearted peepers of the alien visitor in E.T., The Extra-Terrestrial.

What made this unassuming, casually dressed, recluse such a transformative, intellectual powerhouse? Some say it’s because his brain had an unusually large parietal lobe, which is connected to mathematical reasoning. Fair enough. But making time for serene daydreaming through playing his beloved violin (which he named Lina) was as just as important for unlocking the imaginative potential of his unique brain structure.

According to Peregrine White’s “Albert Einstein: The Violinist”,

Einstein relished Mozart, noting to a friend that it was as if the great Wolfgang Amadeus did not “create” his beautifully clear music at all, but simply discovered it already made. This perspective parallels, remarkably, Einstein’s views on the ultimate simplicity of nature and its explanation and statement via essentially simple mathematical expressions.

So maybe E=MC2 can also stand for: easygoing=musical casualness, too.

Ah. Good ol’ E=MC2. E equals the interchangeability (2/Squared) of converting (C) of energy into mass (M), and mass back into energy (E).