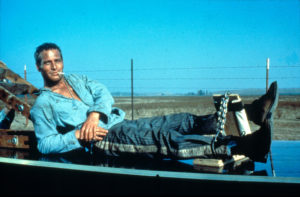 According to most of the world’s great novelists and philosophers, life is full of tragedy and malevolence. It’s inevitable. Shit happens, but it’s still possible to live a genuinely meaningful life. The Buddha said something similar a few thousand years ago, but it seems people need to hear that message again and again.

It’s as if when it comes to this simple truth, what we have here—as the famous line from Cool Hand Luke goes—is failure to communicate. Or failure to listen, perhaps.

In a lot of ways, this 1967 film classic communicates Peterson’s and Buddha’s timeless insight to us. It’s a meditation on what it means to abide in a living hell bent on crushing the human spirit. Indeed, film critic Roger Ebert noted in 2008, “Rarely has an important movie star (Paul Newman) suffered more, in a film wall-to-wall with physical punishment, psychological cruelty, hopelessness and equal parts of sadism and masochism.”

Sounds bleak. But this engagingly realistic story about a defiant non-conformist serving time on a brutal Southern chain gang is inspiring. There’s some heavy-handed religious symbolism at times, but ultimately it’s addressing a heavy religious theme: How do we stay human in an often pitiless world?

The answer Cool Hand Luke offers is found in that rebellious Luke smile.

As one of the inmates says, “He had it on his face right to the very end. Hell, if they didn’t know it ‘fore, they could tell right then that they weren’t a-gonna beat him.”