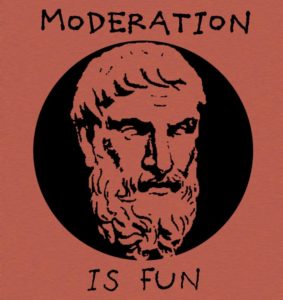 When it comes to abiding, the influence of Ancient Greece and Rome continues to abide.

There’s the time-honored bacchanalian tradition of the toga party, of course. But there are also philosophies from that era that still help to make sense of the world when the party’s over and you’re looking at the world in the cold light of day.

Stoicism and Epicureanism are two such schools of thought, although their original meanings are a little different from how they’re used today.

As the most influential Hellenistic philosophies back in the day, both schools offered differing approaches to a single goal, what the Greeks called arête, or continually cultivating “perfection of being” in one’s life.

Epicurus believed that arête is deepened through what he called a “cheerful poverty.” What he meant by that is we make ourselves miserable by desiring things that we don’t really need. While embracing pleasure as life’s ultimate goal, Epicurus also asserted that a modest life of tranquility in which we desire only what is necessary and natural is the true path to arête.

“Do not spoil what you have by desiring what you have not,” Epicurus observed. Similarly, he said, “Luxurious food and drinks in no way protect you from harm. Wealth beyond what is natural, is no more use than an overflowing container.”

Instead, he advised his followers:

What is good is easy to get, and

What is terrible is easy to endure.

Where Epicureans believe that a simplified life of pleasure makes existence bearable, the Stoics recognized that unbearable shit inevitably happens to us regardless. To be called stoical today, however, implies that you submissively accept whatever random shit blindsides you and then move on unfazed. The original Stoics, however, believed that arête is developed through being prepared for all of life’s inevitable challenges by actively cultivating a life of courage, moral strength, and wisdom.

From this perspective, the Stoic philosopher Epictetus asks, “What is the goal of virtue, after all, except a life that flows smoothly?”

Another Stoic, Seneca, advised “not to give in to adversity, never to trust prosperity, and always take full note of fortune’s habit of behaving just as she pleases, treating her as if she were actually going to do everything it is in her power to do. Whatever you have been expecting for some time comes as less of a shock.”

Marcus Aurelius, the Stoic Roman Emperor, hardly led a simple life governing one of the world’s most powerful and complicated empires. Yet he offered this observation in his collection of philosophical musings (Meditations) that you may want to ponder while recovering from your next toga party:

“You can discard most of the junk that clutters your mind…and clear out space for yourself… by comprehending the scale of the world… by contemplating infinite time… by thinking of the speed with which things change — each part of everything; the narrow space between our birth and death; the infinite time before; the equally unbounded time that follows.”

From Epictetus’ Enchiridion: “Is anyone preferred before you at an entertainment, or in a compliment, or in being admitted to a consultation? If these things are good, you ought to be glad that he has gotten them; and if they are evil, don’t be grieved that you have not gotten them. And remember that you cannot, without using the same means [which others do] to acquire things not in our own control, expect to be thought worthy of an equal share of them. For how can he who does not frequent the door of any [great] man, does not attend him, does not praise him, have an equal share with him who does? You are unjust, then, and insatiable, if you are unwilling to pay the price for which these things are sold, and would have them for nothing. For how much is lettuce sold? Fifty cents, for instance. If another, then, paying fifty cents, takes the lettuce, and you, not paying it, go without them, don’t imagine that he has gained any advantage over you. For as he has the lettuce, so you have the fifty cents which you did not give. So, in the present case, you have not been invited to such a person’s entertainment, because you have not paid him the price for which a supper is sold. It is sold for praise; it is sold for attendance. Give him then the value, if it is for your advantage. But if you would, at the same time, not pay the one and yet receive the other, you are insatiable, and a blockhead. Have you nothing, then, instead of the supper? Yes, indeed, you have: the not praising him, whom you don’t like to praise; the not bearing with his behavior at coming in.”

“Wealth beyond what is natural, is no more use as an overflowing container.” Wise words, unless said container is overflowing with money, in that case I would ignore such advice as it would be most unnatural, and therefore have nothing to do with this information. Yay! Hypothetical riches, but Boo! Actual poverty.