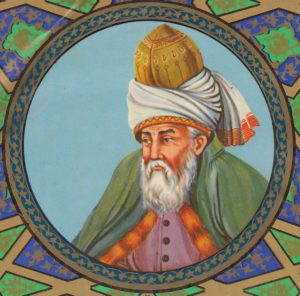 Summary: The spiritual sect of which the famous poet Rumi was an adherent.
Category: Philosophies

Like most religions, Islam has its literal-minded extremists that end up undermining the religion’s positive aspects. In today’s volatile culture clashes, Islam in particular is often misunderstood through the actions of its more fanatical followers.

Knowing more about Islamic mysticism, known as Sufism, could go a long way in counterbalancing this negative misperception.

Where traditional Islam is often characterized by an antagonistic Sunni/Shia split, strict literalism, and stern legalism, Sufism emphasizes contemplation, spiritual development, and the importance of emotion and imagination in cultivating the divine-human relationship.

Not known for their sense of irony, Muslim militants have reacted violently to Sufism’s essentially peaceful message that a loving closeness to God and with each other is the ultimate purpose of life. Consequently, it’s probably safe to assume that Jalaluddin Rumi’s writings aren’t on any of these militants’ reading lists.

This world-renowned Persian poet and mystic is one of the most enduring figures in Sufism. As the son of a renowned Sufi scholar, Rumi believed in the revelations of the Qur’an, but he also criticized the legalism and ritualism that overshadowed a living, intimate experience with the divine. Much of his poetry is steeped in this experiential dimension, making references to savoring the sacred joys of wine and the presence of one’s beloved:

will drink wine night and day.

They will drink until they can

tear away the veils of intellect and

melt away the layers of shame and modesty.

fall in Love, and you will not be separated again.