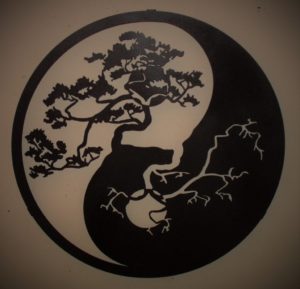 Summary: The oldest currently-existing mass religion in the world has been misunderstood and transmogrified, but it contains one of the best philosophies of living around.
Category: Philosophies
Tags: Eastern philosophy, Taoism

This ancient tradition of philosophy and religious belief about remaining in the flow of life is so simple it’s not always easy to understand.

Taoism can’t be easily traced through written records the way the three main Western religions and even Buddhism can. Although it’s been around for at least 2,000 years, some say Taoism originated in China’s prehistory as a shamanic practice and nature religion.

Simply put, the purpose of Taoism is to discern the Tao, or “the Way.” Simple enough, right? But what is “the Way”?

As its ubiquitous Yin-Yang symbol implies, the Tao is the ultimate unity of opposites (light/dark, action/non-action, etc.) and its creative principle that underlies everything in the cosmos. While acknowledging that “the Way” is indefinable, Taoists use various practices to harmonize with this inexpressible principle and also reflect on passages from ancient texts like the Tao Te Ching:

Being and non-being create each other.

Difficult and easy support each other.

Long and short define each other.

High and low depend on each other.

acts without doing anything

and teaches without saying anything.

Things arise and she lets them come;

things disappear and she lets them go.

These esoteric aspects may be difficult to grasp, but Taoism is all about balancing opposites. So, as one source simply puts it, Taoism means

returning to simpler values and not falling into the pit of distractions and egotistical pride. Instead, as the saying goes, we live simply so that others may simply live.

There is a Taoist story of an old farmer who had worked his crops for many years. One day his horse ran away. Upon hearing the news, his neighbors came to visit. “Such bad luck,” they said sympathetically. “Maybe,” the farmer replied. The next morning the horse returned, bringing with it three other wild horses. “How wonderful,” the neighbors exclaimed. “Maybe,” replied the old man. The following day, his son tried to ride one of the untamed horses, was thrown, and broke his leg. The neighbors again came to offer their sympathy for what they called his “misfortune.” “Maybe,” answered… Read more »

Yes we even have our own Lebowski version of the story in the Dude De Ching!