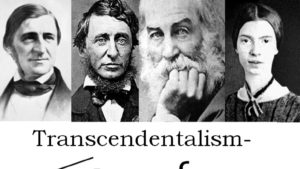 Summary: The American school of philosophy that gave rise to great writers and thinkers like Emerson, Thoreau and Whitman
Category: Philosophies

Although this fancy word doesn’t easily roll off the tongue, it’s really all about simplicity and authenticity.

It began back in 1830s when Ralph Waldo Emerson, a former Unitarian minister in Boston, sought a middle way between two religious extremes: the rigidly orthodox Calvinists and the overly intellectual Unitarians. After leaving the pulpit, Emerson spent some time abiding in Europe, taking in a lot of the literary, intellectual, and spiritual ferment emerging from the Enlightenment. He was also among the first Westerners to read and take seriously key sacred texts from Asia.

Emerson and others in New England blended these influences into a uniquely American philosophy and literary movement emphasizing self-reliance, individual intuition, and the potential for unending self-improvement. Extolling progressive views on feminism and communal living, they also drew from Hinduism and saw divinity pervading all nature and humanity.

The enduring significance of Transcendentalism is captured in this simple summary:

As a group, the transcendentalists led the celebration of the American experiment as one of individualism and self-reliance. They took progressive stands on women’s rights, abolition, reform, and education. They criticized government, organized religion, laws, social institutions, and creeping industrialization. They created an American “state of mind” in which imagination was better than reason, creativity was better than theory, and action was better than contemplation. And they had faith that all would be well because humans could transcend limits and reach astonishing heights.

I wanna study for this one