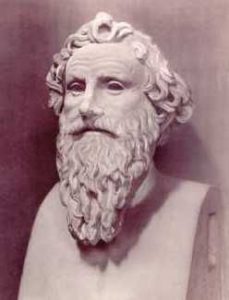 Summary: The Ancient Greek philosophy that posited that the way to happiness was not to hold any fixed judgments
Category: Philosophies
Tags: Ancient Greece

Like other Greek Philosophies (Epicureanism, Stoicism, Hedonism), Skepticism was created as a way to increase our quality of life, though like the others, its name took on new meaning over the centuries.

Pyrrho of Elis had supposedly traveled to India with Alexander the Great and his exposure to Vedic philosophy is meant to have profoundly influenced his worldview. Upon his return to Greece he codified his philosophy: To attain freedom from worry (ataraxia), we must realize that our opinions about the world are highly provisional and as such are prone to disappoint us. Therefore the way to true contentment was to withhold final judgment on all things. By not holding to any particular belief or expectation, one could not be disappointed when they turned out to be false. This he called Skepticism.

Since none of his original writings remain, most of what we know about Pyrrho comes from second-hand sources, and the skeptic philosophy which bore his name: Pyrrhonism. Today, the word skepticism has less to do with enhancing quality of life, and more to do with assessing the validity of a rhetorical argument.

Applying skepticism to our daily lives can be difficult in a day when everyone is supposed to have an opinion about everything, even if they know nothing about it. However, this only underscores its importance. Saying “I don’t know, sir” can be one of the most intelligent (and heroic) things we can do. As Taoism suggests, it’s only when our cup is emptied that we have any room for new liquors.

Skepticism is a very dude way to view the world. Throughout The Big Lebowski The Dude is frequently taking things as they come and with healthy skepticism for outcomes. To be free of clouded thinking and to approach a problem from multiple angles with no bias; this is the essence of skepticism and the Dudely M.O. To the topic of Skepticism might I add Carl Sagan’s The Demon-Haunted World as an essential tome for critical thinking? Furthermore I dare say Dr. Sagan is worthy of great dudes of history. Thankee

I could see Sagan and The Dude smoking Thai sticks and talking about the universe, Plus the good doctor did partake himself. https://azarius.net/news/306/These_7_quotes_made_Carl_Sagan_into_a_true_cannabis_hero/

I would concur as to Dr. Sagan’s worthiness. He liked to spark it up as well.But that’s just like, my opinion.